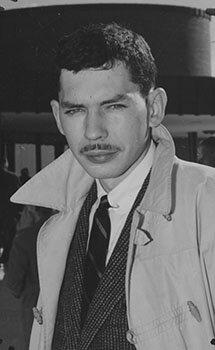 Ernst Schwidder earned his master of fine arts from the University of Washington in 1959 and became the first head of the arts department at Valparaiso University in Valparaiso, Ind. In the mid-1960s, he elected to return to the Northwest as chairman of the art faculty at Seattle Pacific University. From 1967 to his 1992 retirement, professor Schwidder taught art and headed the art department at Pacific Lutheran University in Tacoma. Following his retirement, he opened his own south Seattle studio and continued to produce art suitable for worship space in churches of a variety of denominations throughout the U.S. and western Canada.

His principal medium is carved mahogany wood, but he designed objets d’art in repousse, metal sculpture, fabric art, concrete and stone. He collaborated in executing his designs with associates, students and other artists in glass and metal arts.

In all, Schwidder artwork graces over 90 worship facilities in Washington alone and over 300 from Massachusetts and North Carolina to California and Alaska.

His wood sculpting is easily recognizable for its long, lean, flowing lines, as well as for its idiosyncratic uppercase lettering of Scripture passages. In the craft of an artist, Schwidder did not intend to produce lifelike images, but to design through wood carving and other media visual theological truth apropos to the church setting and ministry in which his work had been commissioned. Thus, a church whose ministry was set in a mountainous, sea or farming area could expect that setting to appear in the carvings. A church whose name evoked an image (Good Shepherd, Saint Matthew, Holy Cross, Advent, Incarnation, et al) would be graced with a sculpture to remind the parishioners of a living name and ministry, and often with unique calligraphy to unite word with image.

The durable and monumental character of Schwidder’s designs (some as large as 40 feet) is borne out by the fact that most remain in their original settings – and even when relocated because of a renovation or other reasons, they continue in use in other settings.

Schwidder died in 1998, but his liturgical art lives on to inspire worshippers and artists who follow him. You will recognize his unique style in a number of Pierce County worship sites:

His work appears also in King, Kitsap, Snohomish, Thurston and Whatcom counties in the worship spaces of Christian, Episcopal, Methodist, Presbyterian and Roman Catholic chapels and churches. His artistic efforts are present also in residential and office designs where, somewhat facetiously, he promised his patrons that his completed design for living or work space might resemble the interior of a church, for in fact Schwidder did not confine the notion of the sacred to churches alone, but also to where people live and work.

The Schwidder Project Committee is self-appointed, including two clergy artists (the Rev. emeritus Joel Nickel from Salem, Ore., and the Rev. emeritus Roger Sylvester from Seattle) and Richard Tietjen, Schwidder’s Tacoma-based pastor from 1983 to 1998 at Grace Lutheran. The three have pictorially recorded over 100 sites of Schwidder design in 10 states and seek not only to give record to the prodigious output of Schwidder designs, but also to assist parishioners to treasure visual art as enhancement to worship and as an abiding reinforcement of teaching the faithful over the generations.

Richard Tietjen, who wrote this article, retired in 2011 after 46 years of active parish ministry, the final 28 years as pastor of Grace Lutheran Church in Tacoma, where liturgical artist Ernst Schwidder was an active member from 1967 until his death in 1998.

In September of 2011, the archives of liturgical artist Ernst Schwidder arrived at Valparaiso University, after hitchhiking all the way from Seattle/Tacoma in the back of a semi-trailer loaded with organ pipes. The archives consisted of 240 three-foot mailing tubes filled with rolled-up architectural drawings and sketches, plus boxes of files, records, photos, and slides. Since Schwidder’s art is installed in approximately three hundred churches across the United States, the only actual work in the collection was a six-foot crucifix of carved mahogany, a gift of his daughter, Anna, to the University’s Brauer Museum. This arrival at Valparaiso University was actually a homecoming of sorts, for in 1958 Ernst Schwidder became the first head of the university’s Department of Art.

Schwidder’s arrival at Valpo amounted to a serendipitous convergence of creativity. He had achieved acclaim as a painter with gallery representation in Seattle, where he had earned an MFA at the University of Washington. His father had been pastor of Trinity Lutheran Church in Seattle; in fact, there had been Lutheran pastors in his family since the days of the Reformation. As a student he went through an agnostic phase, but could not shake the impact of late French Romanesque and early Gothic architecture. He loved music, architecture, drawing, and drama and was looking for a way to put it all together when he met Charles Stade, the campus architect and designer of the Chapel of the Resurrection, which was dedicated in 1959, the year after Schwidder’s arrival on campus.

Slowly it came to him that in the cathedral environment there could be a fusion and stimulation of all the senses: the visual impact of sunlight through stained glass windows, the lively presence of sculpted figures and fascinating architectural detail, the sound of chanting floating through the soaring vaults, the smell of incense, the taste of bread and wine, and the brilliant sound of the organ. It dawned on him that there was a way to combine all of his interests: religion and theology, the visual arts, architecture, music, theater, and even writing (despite his dyslexia). The creative opportunity of teaching art, planning the art curriculum, exhibiting his own work, along with designing vestments, banners, and graphical symbols for worship services in the Valparaiso University chapel became the impetus for his lifelong career. Records indicate that he designed a maquette (scale model) for the Christus Rex sculpture over the high altar in the chapel.

The start of Ernst Schwidder’s career as a liturgical artist coincided with the great post-World War II church building boom. Taking a leave from Valparaiso University, he went to work as a designer of chancels and chancel furnishings in the Charles Stade workshop. In 1963, he gave up his chairmanship to work fulltime with Stade. The Schwidder family moved to the Pacific Northwest in 1964, but Schwidder continued to consult, carve, and work for Stade from the West Coast. During this transition, he shifted his methods from those of a painter to those of a sculptor; he worked first with repoussé copper and later with wood carving. He preferred roughhewn surfaces with chisel marks, textured for touch. On more than one occasion, he humorously called himself a “chiseler.”

Describing the developmental shift of his artistic vision from painting to sculpture, from oil paintings of mystic landscapes to the hard and heavy weight of a sculpted crucifix anchored to the ground, Schwidder wrote:

“As I reminisced about those early years, a critic’s appraisal of my work came to mind, describing my paintings as ‘quiet, poetic… in which vague images seemed to float in diffused moonlight-pictures which embody a personal somber dream world.’ For a while this was enough, to retreat from a noisy, bloody, dirty world into a pantheistic fantasy.“

“As conditions and circumstances began to change, I reacted with increasingly explicit images, particularly with regard to a deepening religious concern. The crucifixion became the seeding dandelion and the resurrection replaced “solar fertility” in my pictorial vocabulary. A greater empathy for people and an almost evangelistic desire to share my beliefs led me into the field of liturgical art. My work progressed from the painted image to sculptural forms and then to architectural sculpture and finally to the design of the entire building and its furnishings.“ (Unpublished essay in papers of Ernst Schwidder)

Most often a Schwidder crucifix contains the corpus of a dead Jesus, head bent to the side, seemingly resting on his shoulder. This lifeless body which paradoxically brings new life seems to emerge from the wood in a dramatic hint toward resurrection. The artist makes a direct reference to Jesus’ words in John 12:24: “unless a kernel of wheat falls to the ground and dies, it remains only a single seed. But if it dies, it produces many seeds.” The crucifixion becomes the “seeding dandelion” which the anti-religious culture cannot eradicate, even though it in itself is a scandal. “Cursed is anyone who hangs on a tree” (Deut. 21:23). But with Paul we are led to see that God’s foolishness is greater than human wisdom, God’s weakness greater than human strength, and, with an artist like Ernst Schwidder, God’s ugliness is more scintillating than human beauty. Ernst Schwidder sculpts the theology of the cross.

It has been fifteen years since the untimely death of Ernst Schwidder. It is time for a reassessment of his work as a liturgical artist, that it might once again revive, encourage, and renew the aesthetic vision of the church.

Joel Nickel is a retired Lutheran pastor and active liturgical artist living in Salem, Oregon. He served parishes in Detroit, Michigan, Chicago and Champaign, Illinois, and Stayton, Oregon. He attended the Chicago Academy of Fine Art and the Oregon School of Arts and Crafts.

For notification of new entries
Email *